Today I made a batch of plain salted almond crackers, and figured I might as well use up some of the shredded unsweetened coconut in my cupboard. Originally I bought it to make coconut butter, but I killed the attachment on my immersion blender. :(

Not sure where I got the recipe, but here it is:
2 egg whites
1 cup coconut flakes
1/16 cup maple syrup
1 tsp vanilla extract (real)
pinch salt
cinnamon (optional)

Mix egg whites until stiff peaks form. Fold in maple syrup, vanilla, and salt and stir until just combined. Stir in coconut and cinnamon. Drop onto parchment lined paper in rounded teaspoons and bake at 325F for 12-15 min. Check at 12 min, do not overbake. 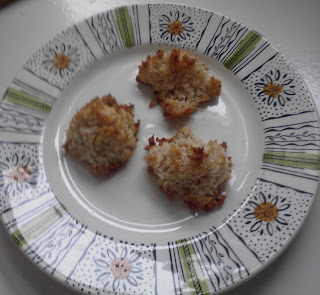 Mine were a little brown when I checked at 14 minutes, hence the caveat about checking at 12 minutes. They taste fine though!