For the last 5 days now (plus today), I've been eating low-carb paleo. As in, under 50g of carbs a day, and none of those are from starchy vegetables. A small amount are from fruit, but not much at all. It's part of an experiment I'm doing after I listened to a podcast by Robb Wolf. If you want to listen to some, there's a list of podcasts in my sidebar. Click on "The Paleolithic Solution w/Robb Wolf" and listen to the very first one he did. He talks about reasonable amounts of carbs and how to lose fat.

Anyway. So that's where I am right now. I've hit my ten pounds lost mark since I went Primal/Paleo at the beginning of January, but I would be much farther ahead if I'd not had a 2-week falling-off-the-wagon incident. Regardless, I am where I am and am moving forward!

So. You want the recipe for my Ginger Apple Pulled Pork, do you? Good for you. You'll love it. Feel free to adjust as you go. Mine was pretty much unsweetened, because I'm keeping that to a minimum. The original recipe from paleOMG calls for honey and garlic, which I omitted. Actually, I didn't totally omit garlic; I did use a pinch of garlic salt. It doesn't seem to affect me nearly so badly as "real" garlic. (For those reading who don't actually know me, my body can't digest garlic.)

I made enough "sauce" to cover about 9oz of pork. I had 2 pork tenderloins that I cooked in my slow cooker on the weekend. I cut off 9oz worth and threw the pork in on top of the finished sauce, heated it up, then shredded the meat with two forks. It worked perfectly. We had it with some Brussels sprouts sautéed in coconut oil. So so so awesome. <3 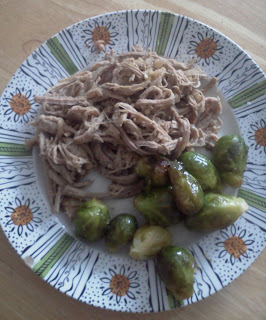 Directions
Heat the olive oil and onions in a small saucepan and cook until the onions start to caramelize. Add the rest of the ingredients and bring to a boil. Cover and reduce to a simmer. Cook until the apples are soft enough to mash with a masher or fork.

Throw the meat on top and stir it around. Heat it through, then shred with a fork.

Shove it in your face.

~
You could totally multiply this recipe and cook an entire tenderloin in it in the slowcooker, then shred the meat at the very end. I would say to at least double the recipe if you're using a 1-lb tenderloin, and cook it for 8hrs at least on low. If you want a bit more sweetness, go ahead and add 1-2 T of honey or maple syrup when you're putting in all the ingredients.

Please leave a comment if you make this!
Posted by Rebecca MacLary at 1:05 PM