No Wonder North Americans Are Fat.

Here's a quote that literally jumped off the page at me while I was reading the Wikipedia article on the Paleo diet:

More than 70% of the total daily energy consumed by all people in the United States comes from foods such as dairy products, cereals, refined sugars, refined vegetable oils and alcohol... 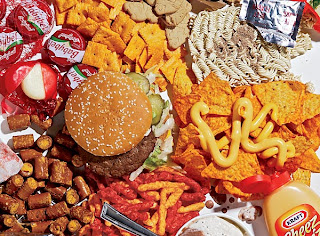 Does that seem anything less than totally ridiculous to anyone other than me? I mean...ok. When I was eating crap, I ate a lot of crap. But never that much. 70 percent??? And when you figure that probably everyone who eats this way is ALSO eating far, far, far too many calories to start with, that's an enormous amount of  crap. That stuff isn't even food. This type of diet translates into obesity, heart disease, infertility, PCOS, stroke, diabetes, and cancers, and probably many other health problems. Those are just the obvious ones.

These days, I'm eating ZERO cereals, refined sugars, refined vegetable oils, and alcohol. I eat cheese (raw swiss) once in a while, and I'm not adverse to having a glass of raw milk or putting a bit of cream in my coffee. But that's really practically nothing. Not even one percent of my diet. Not even 0.10 percent!

The only sugar I'm eating now (which is extremely rare, in any case) is honey and maple syrup. And guess what? I'm not really craving it. I'm eating so low carb at the moment that I'm in ketosis as I write this. Go ahead, look it up if you want (click on the word "ketosis," I made it a hyperlink for you).

That's the point. Our bodies were MEANT to be fat burners, not sugar burners. And that's what mine is doing. It's burning the fat right off of my ass. And that's the way I like it.

Source: Wikipedia
Posted by Rebecca MacLary at 1:06 AM