Just because I eat paleo/primal doesn't mean I can't have pancakes! Today is Shrove Tuesday/Pancake Tuesday and so I made a special PWO-meal. I made two versions of pancakes, one for me and my daughter, and one for my husband (who doesn't like my version). My version is made from almond butter, eggs, yogurt, vanilla, and cinnamon. I used maple syrup on top, so I didn't include the honey from the recipe. I made a half batch, which resulted in 10 2-inch pancakes.

I also enjoyed some breakfast sausages (wheat, nitrate, and sugar-free) and some frozen raspberries...and some maple syrup, as I said. Delicious! Here's a pic of what's left of my lunch (forgot about taking a pic until halfway through)... 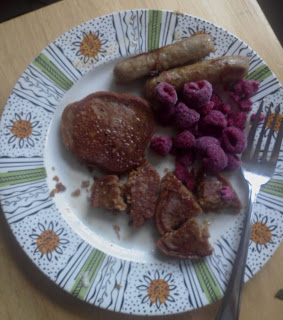 This is a fairly high-cal meal due to the fatty sausages and the almond butter, but that's ok. It's a workout day! I'll have to make sure I get lots of protein later, since this meal was kind of low. Macros: 1090 cals, 71g fat, 70g carbs, 46g protein.

For my husband's pancakes, I used 1/4 cup almond flour, 1 tbsp coconut flour, an egg, 1 tsp vanilla, and some cinnamon. They were much more like regular pancakes. The almond butter ones are not.
Posted by Rebecca MacLary at 1:12 PM